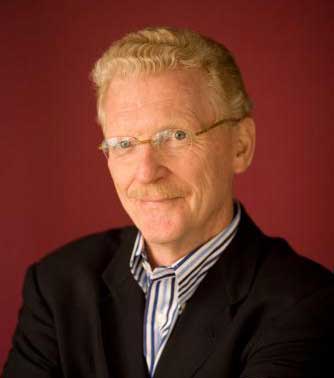 Bill Geist, a New York Times bestselling author, an Emmy Award-wining retired correspondent for CBS Sunday Morning, and a Bronze Star recipient (for his service as a combat photographer with the First Infantry Division in Vietnam) is now IBA Hall of Famer.

Born and raised in Champaign, Illinois, Geist, a 1968 graduate of the University of Illinois, began his career as a reporter and columnist for the Suburban Trib section of the Chicago Tribune before heading East to write his popular “About New York” column for the New York Times. His move to television occurred in 1987 when asked by CBS to join its iconic CBS Sunday Morning program as a correspondent.

Geist would spend 30+ years traveling the country for the program, telling the stories of America’s most unique (and, Geist adds, “Let’s be honest, strange-people and places,”) while also filing reports during CBS’ coverage of Olympic Games, Super Bowls, World Series, and NCAA basketball tournaments.

While Geist could rightfully boast of having nine  bestselling books including Little League Confidential, Lake of the Ozarks, and Good Talk, Dad (the latter co-authored with his son Willie Geist of NBC News) not to mention his very own star on Hollywood’s Walk of Fame, he seems most proud of his 3rd Place finish in the Illinois State Fair Bake-Off (Yeast and “Quick Breads” Division.)

“Bill Geist’s career is a blueprint for every aspiring journalist,” remarked John Idler, President and GM of WLS-TV/ABC7 Chicago and IBA Chairman of the Board. “As a renowned broadcast and print journalist and award-winning war photographer, Bill’s legacy is one of excellence.  It is with great pride that we honor this outstanding journalist and native son and, last but not least, Illinois State Fair bake-off finalist.”

“Bill is more than a reporter; he’s a master storyteller,” suggested Dennis Lyle, president & CEO of the Illinois Broadcasters Association. “He somehow always found a way to make his viewers feel like they were right there on the scene with him, whether seated one stool over at the counter of a greasy spoon diner serving up award winning pie or riding shotgun through rural America in Bill’s weathered RV.  He’s indeed one-of-a- kind and we’re so pleased he accepted our invitation for induction into IBA’s Hall of Fame.”

Qualification for IBA Hall of Fame induction requires nominees to be native Illinoisans or have worked on their craft a significant number of years in the state. Geist to be inducted in 2021.